In July 1838, the village of Coogee was gazetted with many of the streets in the district named after sea creatures. Today Dolphin St, Neptune St, and Bream St, still remain. It’s thought that Coogee Bay Road and Arcadia Streets were renamed, their original names Whale St and Fish St, respectively.

Coogee is one of the older south eastern residential suburbs, originally settled by the wealthy as a retreat from the city. 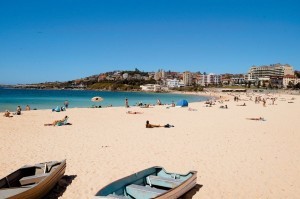 In the early 1900s, Coogee was a fashionable seaside resort. Taking a tram to Coogee on a Sunday was a popular pastime. As surf bathing became more popular, the Coogee Surf Lifesaving Club was formed in 1907.

Coogee’s attractions included the Coogee Aquarium and the Coogee Ocean Pier, which opened in 1928. In 1929, the Council added a shark-proof enclosure to the pier, which encouraged night swimming and surfing.

The Aquarium building with its pleasure gardens, sea water baths and restaurants attracted great crowds until it was demolished for safety reasons. In its place, a new building with a similar appearance to the original now stands offering arcades of shops, restaurants and entertainment venues.

In the late 1980s, the Randwick City Council embarked on a bold redevelopment of the Coogee seashore area. The resulting work along with the arrival of the Holiday Inn and the refurbishment of the Coogee Bay Hotel, has given rebirth to the area as a major international holiday destination.

Surrounded by a unique bay and having undergone a recent ‘facelift’, Coogee is now one of Sydney’s most sought-after suburbs. Easy access to the city, a stroll to sand, surf and shops and coastal walks make Coogee a desirable suburb for families.

Few of the Victorian mansions and villas remain today as many were swept away in the flat-building boom of the 1960s. There’s a mix of older-style apartments, new townhouses and apartments, alongside Californian bungalows, quaint freestanding cottages and double-storey houses with large backyards.

If you want to look further than the beach for your exercise, you can stroll the coastal walkways and seek out the beachside parklands. There’s also the Coogee RSL, Coogee Bowling Club, the Randwick Rugby Club and the Randwick and Coogee Swimming Club. In summer, Coogee Oval is home to cricket.

Distance from the CBD & Transportation

Coogee is approximately 7km by road to the CBD. The area is well served by public transport. Buses 372, 373, 374 all depart from the CBD at regular intervals and terminate at Coogee Beach. From Sydney Airport, you can take the new 353 Service. From Bondi Junction Railway/Bus Exchange take the 314 or 353.

The Bay & Bondi Explorer is a popular Tourist Service that begins in the CBD, follows the southern harbour shoreline to Bondi Beach, then travels and stops at Coogee Beach before returning to the city.

Most Sydneysiders have enjoyed live music at The Coogee Bay Hotel or a quiet ale in the beer garden.

The magnificent Wylies Baths, originally built in 1907 on the cliff face and hewn out of sandstone rock at the southern end, were recently refurbished. There is also another pool exclusively for women and children.

Coogee has a wide variety of cafés and restaurants – many with pavement seating to catch the sea breeze. There’s the child-friendly and always busy Bazura, Coogee Café and the Coogee Bite as well as tempting Asian restaurants. And, of course, there’s fish and chips, perfect for a winter picnic by the water.